See the Gulf landscape from a new perspective when you travel.  It's not just a train ride – it's a total outback experience. 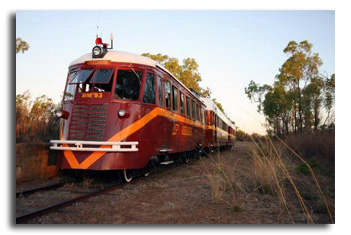 Croydon is the rail depot and destination for the Gulflander train. Today it provides tourists with an historic journey through savannah country on original and unique termite resistant, heritage listed steel rails and sleepers. The Gulflander travels to the architectural award winning reconstructed Croydon Station weekly, staying overnight Wednesday before returning to Normanton on Thursdays. Normanton was established in 1868 but became a land/sea port for wealthy Croydon when gold was discovered. The train carried goods, people and the gold itself.

Please enquire about other special services and short trips which are available.

Normanton became a land/sea port for wealthy Croydon when gold was discovered to carry goods and equipment, people and gold. In the 1890's the Normanton to Croydon service consisted of 5 carriages, 68 wagons and 2 guard's vans.

Three A10 locomotives, built in 1877, were transferred to Normanton in 1888-9 and used for the construction of the line and the commencement of service, but were replaced in 1892 by B class locomotives. A10 locomotives 203 and 204 were condemned in 1894-95 and their chasses are in the Normanton Station yards today.

The original Golden Gate Station was opened in 1891 because it was the site of the deepest, longest lived and most productive mines of the field and apart from Croydon, the most populated.

The "Gate" had a large school, 11 hotels, a police station, 3 butcher shops, 5 general stores and a barber's shop with a billiard saloon. It had a baker, plumber and draper. In 1899 the Station was staffed with a Post and Telegraph Office, an Agency of the State Savings Bank and a porter. It had a goods shed and a staff cottage and signals were installed. The Golden Gate Mining and Town Complex is State Heritage Registered and the place contains extensive social archaeological evidence for future research.

In 1906 a siding was opened from the main line to the Pioneer Mill which was moved to Belmore Creek in 1902. Queensland Rail sold the last A10 (202) locomotive to J. Forsayth who owned the Pioneer Mill and it was used for shunting from the Golden Gate Station until it was abandoned when the Forsayth battery was closed. Locomotive 202 was rescued and has been partially restored by the Croydon Shire Council.

When the gold diminished, the buildings associated with the Golden Gate Station were sold off early in the 1930's and the station was replaced by a siding. The "Gate" siding was removed in 1941.

The innovative and esteemed engineer, George Phillips, designed a unique steel sleeper system that was not susceptible to flood or termite damage and implemented it between Normanton and Croydon.

George Phillips also designed the original Croydon Railway Station which was destroyed by a cyclone in 1969. Parts of the building were used to construct a temporary station but it also collapsed from storm and termite damage in 2003. The Normanton - Croydon Railway is heritage listed on the Register of the National Estate and on the Queensland Heritage Register and the new Station, built by Buchanan Architects, received a prestigious engineering commendation in 2006.

Today the RM93 called the Gulflander (a 102 horsepower diesel engine motor built at Ipswich Railway Workshops in 1950) carries 2 cars and remains one of the great Australian train rides, taking passengers into the depths of goldfield country and back more than a century in time. It has been the motive power on the Normanton to Croydon rail line since 1982 and is known affectionately as the train that runs from "nowhere to nowhere".

Due to the independence, distance and the isolation of the line the locomotives and rolling stock have remained at Croydon and Normanton providing a remarkable physical record of the railway. The railway line was one of the earliest narrow gauge railways in the world and is a remarkably intact and unique example with world heritage and rare conservation value.