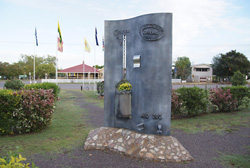 The park is situated in the middle of town and features majestic steel sculptures nestled in between the lovely gardens. The sculptures were commissioned under funding received for the Centenary of Federation celebrations and depict Croydon's unique heritage focusing on the role of Aboriginal culture, Chinese settlement, the Pastoral Industry, the Railway & Gold Mining in the establishment of the region.

Croydon's War Memorial is a additional significant feature of the park, it was commissioned from Blacksmith Artist Hans Pehl and is in the shape of an open book which depicts the names of former soldiers from Croydon who fought in the First World War, Second World War, Korean and Vietnam Wars. Surrounding the memorial are a series of unusual interpretations of weapons engraved with inscription of the dove of peace.

Every ANZAC Day there is a dawn & early morning Services held to commemorate this important annual date. Come join us for Rum Toddy and a game of Two Up!! Scattered throughout the park are gazeboes with picnic tables, free electric barbeques, children's playground and toilet facilities available to help make your rest stops in Croydon not only interesting, but wonderfully relaxing.